The Italian Agency for Development Cooperation commitment in the Western
Balkans is part of the wider European commitment for the integration of the
Western Balkans, known as the Berlin Process launched in 2014.
In 2018, the documents of the European Commission A credible enlargement
perspective and enhanced EU engagement for Western Balkans and EU-
Western Balkans six flagship initiatives established six priorities and main areas
of commitment and intervention: 1) Rule of law, 2) Security policies and
migration management, 3) Social and economic development, 4) Connectivity
for better transport and energy distribution, 5) Digital Agenda for better digital
services, 6) Reconciliation and good neighborhood relations.
Moreover, in 2021, as a result of the Brdo Summit, a Green Agenda has been
adopted, with a detailed action plan focused on reducing pollution and green
house gas emissions, managing an energy transition, putting in place a circular
economy, supporting the protection of biodiversity and advancing sustainable
farming and food production.
EU accession negotiations have been opened with Montenegro in 2012 and
Serbia in 2014. 19 July 2022, accession negotiations have been opened with

North Macedonia and Albania. Since 2016,
Bosnia & Herzegovina and Kosovo are potential candidates. 19 October 2021,
the European Commission adopted the 2021 Enlargement Package,
enlightening state of play, critical issues and progress made by the Western
Balkans Countries on their path towards the European Union.
The integration process is ongoing. From bottom to top, the cooperation
initiatives, funded by the European donors – Italy is a main partner among them
-, planned and implemented in close coordination with the Western Balkans
Governments, are regularly improving the quality of life of local communities,
sharing legislative and economic European standards and boosting the reforms
agenda of the Western Balkans Countries.

A historical commitment in the Western Balkans

The Italian Agency for Development Cooperation started its activities as a
governmental Agency in January 2016, following the approval of the Italian law
125/2014. Its present commitment is in continuity with the Italian Government
story of cooperation in the Western Balkans and worldwide.
In the Western Balkans, the Italian Government has funded International
cooperation initiatives since 1991. The first intervention was the Operation
Pelican (Operazione Pellicano) to overcome the humanitarian emergency
caused by the fall of the communist regime in Albania. The Operation was
conceived and managed by the Directorate General for Development
Cooperation of the Italian Ministry of Foreign Affairs.
Emergencies, from lack of food and institutional vacuum to refugees’ protection
and fight against poverty, were the main issues tackled throughout the nineties.
Operation Pelican (1991-1993) and, to mention a second essential cooperation
initiative, the International Operation Alba (1997), planned and leaded by the
Italian Government after the collapse of the financial pyramids in Albania, were
successful. New cooperation challenges began.
In 2002 the first stone of the new bridge of Mostar in Bosnia & Herzegovina was laid down by the President of the Republic of Italy, Carlo Azeglio Ciampi. The old bridge was shot down during the war. The new bridge was inaugurated in 2004. Italy was main donor in that extraordinarily meaningful initiative of the International community, a symbolic turning point for Europe. New infrastructures, from roads to water and energy distribution, were planned
and built. During this period, the Italian focus on human rights, civil protection,
fight against poverty and improvement of the communities’ quality of life never
stopped. New schools and hospitals were built, services for persons with
disabilities were created, new enterprises were supported.
Even if critical issues remained, the way towards the European Union was
open. See also our interactive infographic at madetogether.aicstirana.org or
download the book Made Together at tirana.aics.gov.it for more.

The new lead of the Italian Development Cooperation System

According to the Italian Law 125/2014, the Italian Agency for Development
Cooperation coordinates and leads abroad the Italian public and private
Development Cooperation System, following the guidance of the Ministry of
Foreign Affairs and International Cooperation of Italy. Its main task is the
technical partnership with the Governments beneficiaries of Italian cooperation
policies and funds, from the identification of new cooperation initiatives to the
management and monitoring of the ongoing ones, included the projects
approved and started before 2016 first year of activities of the Agency.
In the Western Balkans, the Italian Development Cooperation System
implementing initiatives funded by the Italian Government is composed by a
large number of public and private actors, well rooted throughout the region.
Geographical and cultural nearness has made the list long and diversified,
starting from the Italian constitutional body Superior Council of Magistrates that
sides the Ministry of Justice and the School of Magistrates in Albania for the
judicial reform and a new generation of Albanian magistrates.
Important Italian cooperation partner is the Italian Department of Civil Protection
of the Presidency of the Council of Ministers, supporting disaster risk
management and strengthening the National Civil Protection Institutions of
Western Balkans to offer to local communities a public service closer to the
European standards, from technical means to professional capacities.
Well know is the story of friendship and human cooperation between Albania
and Regione Puglia, started in 1991, people for people overcoming the
humanitarian emergency. Regione Puglia has a long lasting presence in the
area, with a branch office in Tirana. Only to mention its most recent commitment
as a cooperation implementing partner, Regione Puglia, funded by the Italian
Government, sides the Albanian Ministry of Agriculture and Rural Development
and the Municipalities of Vlore and Himare, sharing its best practices in Salento,
to improve local, touristic management standards and a stronger territorial
narrative, aware of environmental issues and based on cultural local identity
and typical products.
From South to North of the Italian Adriatic coast, Regione Molise, Regione
Marche and Regione Emilia Romagna work in the Western Balkans in many

cooperation initiatives, from the safeguard and enhancement of cultural heritage
to sustainable development of tourism, from education to Institutional capacity
building. Regione Toscana, for National Health services, Regione Trentino, for
higer touristic standards, and Regione Umbria, in the agro-food sector,
implement or have recently completed cooperation activities.
It’s widely branched in the Western Balkans the presence of non governmental
Italian organizations focused on social and economic development of local
communities, working in Albania from Malesi e Madhe to Permet and all along
Via Dinarica, in Bosnia & Herzegovina and Kosovo. Better healthcare and
education services, social inclusion, gender equalities, new micro enterprises
with a special focus on new generations opportunities are only some of the
many issues tackled by experts and volunteers of the Italian civil society.
A strong partnership on the ground links the Government of Italy to the
Agencies of the United Nations. In 2021 the Italian Agency for Development
Cooperation has funded initiatives implemented by UN Agencies, such as
UNDP, IOM and UN Women, supporting the protection of the marine protected
area of Karaburun Sazan in the Bay of Vlore and Via Dinarica in Bosnia &
Herzegovina, the engagement of the Albanian Diaspora in the sustainable
development and institutional reforms path of Albania, the empowerment of
women and gender equalities.
The Italian Agency for Development Cooperation is a bridge of human
resources, ideas and technical capacity between the Governments of Western
Balkans and the Italian best practices for sustainable development and
European integration. 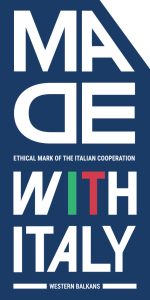